Today we’re exited to introduce our October Design of the Month – Canopy by Ellie Snow. We love this design for it’s fun approach and modern, romantic feel. As our Design of the Month, all custom letterpress invitation orders of our Canopy design placed between now and October 29 will receive 20% off – don’t miss out! (Promotion may not be used on purchases of other designs.) 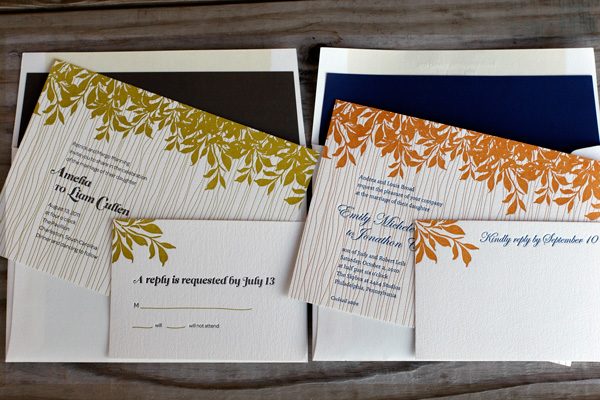 Ellie Snow received a BFA in printmaking from the University of North Carolina at Chapel Hill, and afterward tried (and hated) about four different career paths before transitioning into her current career path as a freelance graphic designer. In 2008, Ellie launched her design blog, Mint, and got engaged shortly thereafter. After receiving great feedback on the stationery she created for her own wedding, she began designing for other couples. She is now a freelance designer and we’re happy to call her one of our Bella Figura designers!

What is the inspiration behind Canopy?
When I’m designing invitations I love to imagine the wedding and the couple behind them—and in this case, they could be whatever I wanted them to be! So I imagined a small, summer, outdoor wedding surrounded by those beautiful old trees we have in the South. I wanted it to be a little quirky and modern, and sentimental, too. 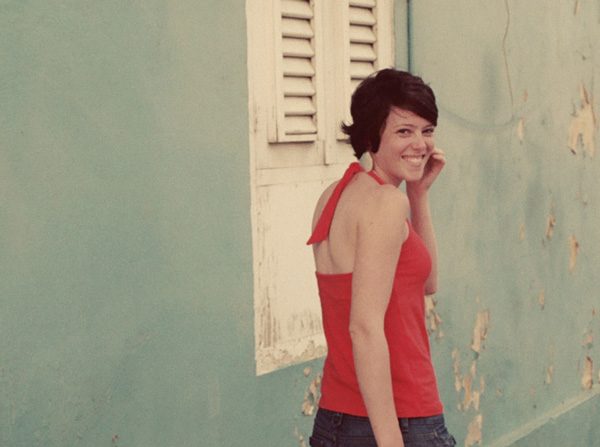 When did you know you wanted to be a designer? How did you get your start?
I always thought I’d be a graphic designer from the time I was little. Somewhere along the way I decided I wanted to pursue a career in social work, but it only took a year of working for a non-profit for me to realize I needed to be creating things on a daily basis. It’s so energizing! I teamed up with a freelancer to get my start, and once I had a few pieces in my portfolio I was lucky enough to get hired with a small design firm. I was an art major with a concentration in printmaking (letterpress, screen printing, and book making), so graphic design wasn’t such a stretch, even though I didn’t go to school for it.

If you were an ice cream flavor, what would you be?
I’d have to say vanilla, but with lots of toppings. The toppings are the best part!

What’s your favorite PMS shade?
I love a bright red-orange these days, so I’m going to go with 172.

What other designers/illustrators do you admire?
I’m really into Olle Eksell‘s work right now. 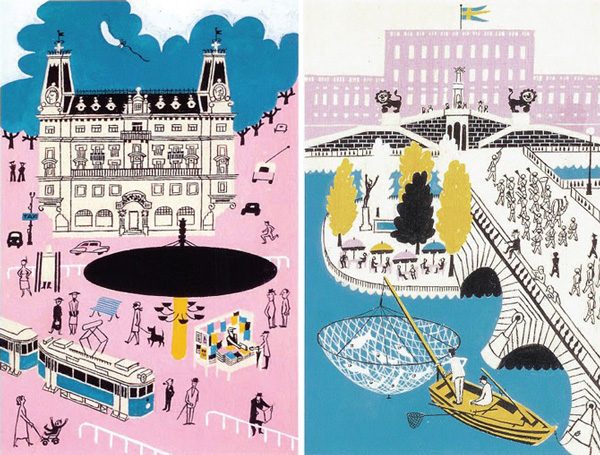 If you could live anywhere in the world, where would it be and why?
Maybe Italy. I think Italian is the most beautiful language, and the idea of having fresh food markets always within walking distance sounds heavenly.

What five things on/in your desk could you not live without?
My laptop, of course! And I always have scissors, a good pen, scrap paper, and a ruler within reach.

What’s the most memorable vacation you’ve ever taken?
My now-husband and I spent three and a half months backpacking around Thailand. We briefly visited Laos and Malaysia, too. Kind people, incredibly delicious food, and such gorgeous scenery! 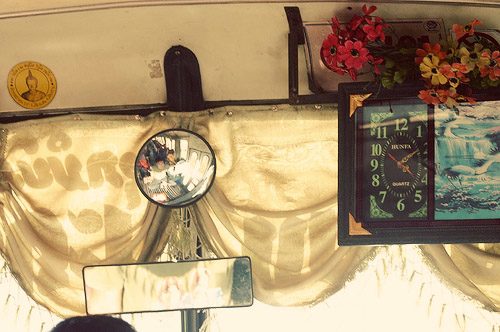 Can you share a favorite childhood memory?
North Carolina doesn’t get much snow, but in 1989 my hometown was “buried” under 15″ of snow. 15″ isn’t a lot of course, but because it was so windy the snow piled up to 8 feet in some places. At the time I was probably 3 feet tall, making it especially magical! I remember people sledding on whatever they could find – trash can lids, plastic bags… needless to say we don’t keep sleds around in North Carolina!

What’s something about you that no one would ever guess?
Even though I spend about 10 hours each day on the computer and am a constant blogger, I love the idea of unplugging completely. No cell phone, no computer, no television…just good books, home cooked meals, and lots of time outdoors. Sounds nice, right?