Today’s guest post comes from Bella Figura designer Kamal – our featured designer during the month of October. Kamal recently spent a month in India, where she rang in the New Year, enjoyed festive wedding celebrations for her niece, and took in many of the beautiful sites and sounds. Today we’re sharing the first part of her journey – we’ll be sharing more later this month!

India, my beloved country, is known to the world as a land full of culture, tradition, vibrant breathtaking colors, awe inspiring textiles, a mecca of spices, warm hearted hospitality, overwhelming maternal patriotism, and a pool of forward thinking youth determined to make their mark in the world. To me, however, India simply is and forever will be the land of my father. After all, I grew up on endless nights of story telling from him, everything from his favorite sweets to his spiciest food experiments; his childhood friends to his mothers lullabies; his immense struggles to his groundbreaking achievements. It’s the motherland that nurtured his youth, prospered his adult years, influenced his thinking and has forever imprinted its love in his heart and mind. And Mine. 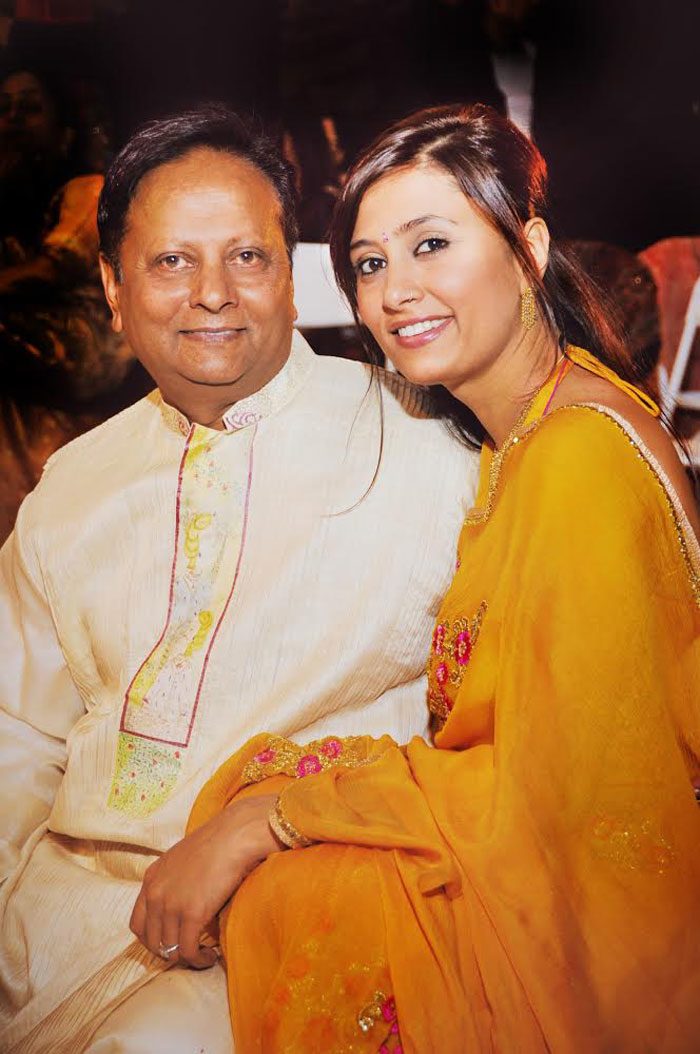 Traveling to India has been a part of my life since I was young, visiting my grandparents, aunts, uncles and cousins. Each year was the usual ritual: 2 weeks in Mumbai followed by a week in Gujarat, hence my 2nd dialect, Gujarati. The state of Gujarat is my father’s “home” where many of our family members still live and where my father’s most vivid memories still carry on. Needless to say, I was heavily influenced by the colors and joy of India from a tender age. So when after 13 years, I had the opportunity to travel to India, I was truly overjoyed. The most exciting part was the fact that I was traveling with my parents and my brother – just the four of us, together – like I was 16 again. 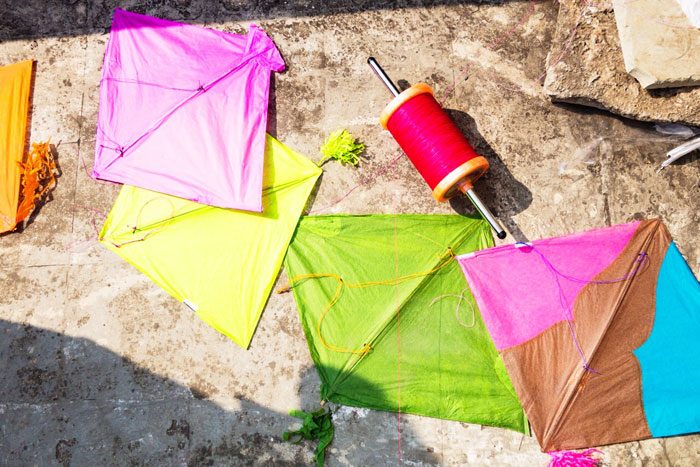 Being that my father was raised in the state of Gujarat, located in the Western part of India, its no surprise that his absolute favorite holiday was a festival called Uttarayan, The International Kite Festival – the pride of the “Jewel of the West”. The festival marks the day when winter begins to turn into summer, according to the Indian calendar. It is the sign for farmers that the sun is back and that the harvest season is approaching. Vast cities in Gujarat delve into organizing kite competitions, where kite flying starts as early as 5am and goes on until late night with as many as 8-10 million people indulging in the festival. 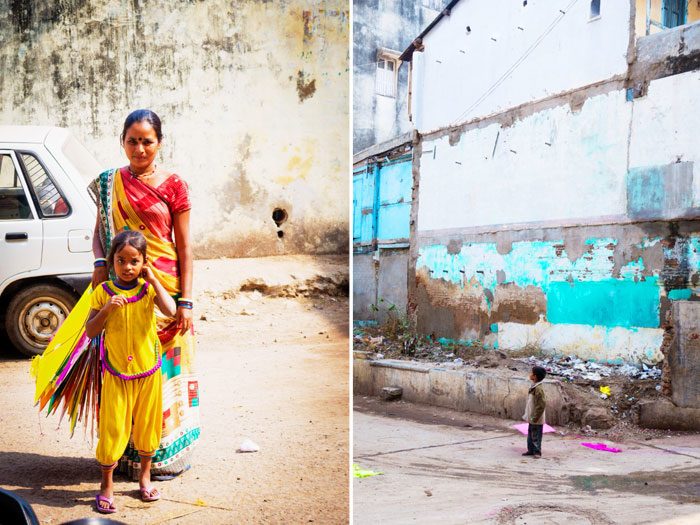 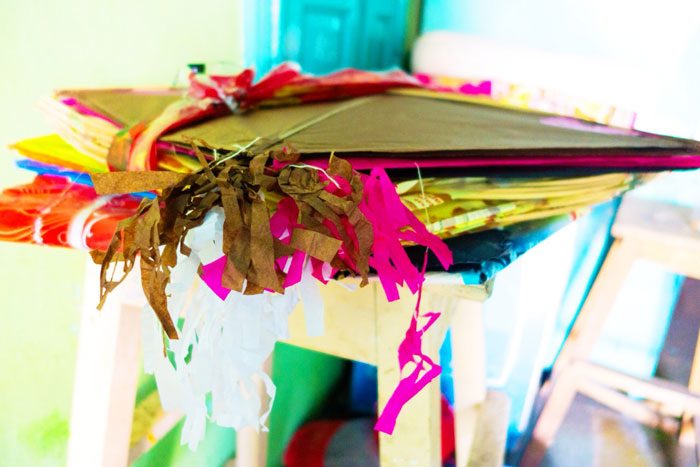 The awe-inspiring brilliant colors, grainy textures and leisurely way of life were noteworthy on this special day. It was like “roof-top-party-hopping”. Music was blaring in the air. People were climbing up and down each other’s roofs, drinking King Fishers, leaping and flying their kites, heads up everywhere. The entire state succumbed to a serene yet enticing buzz. It was like nothing that I have ever seen before! 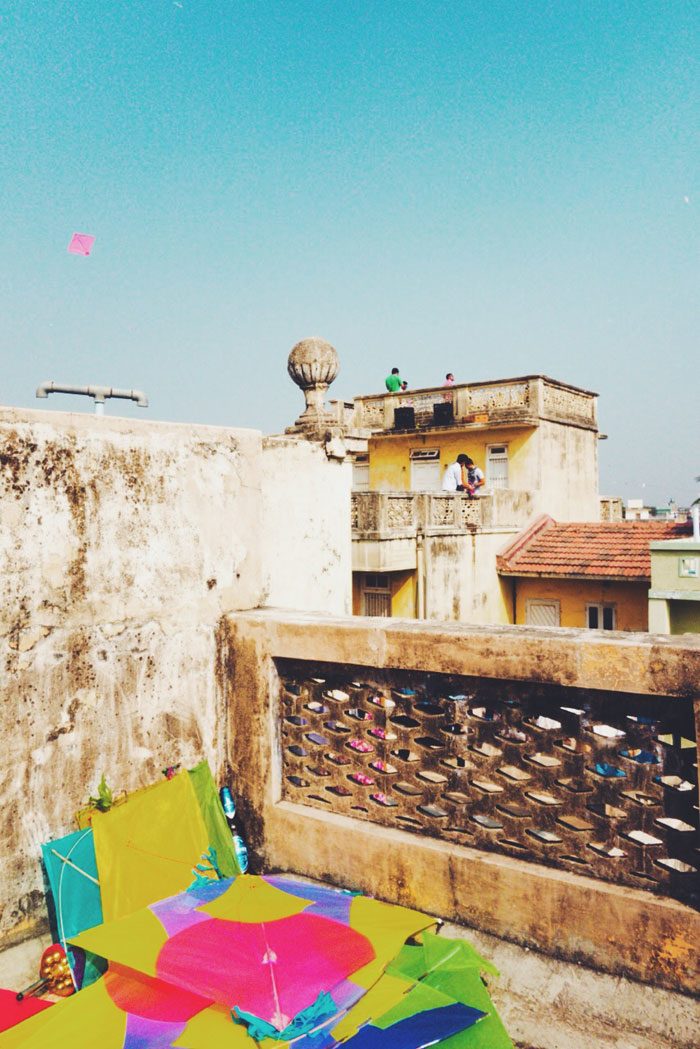 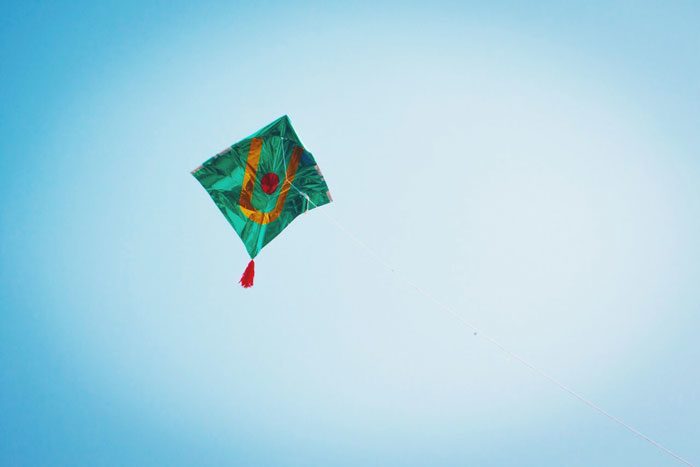 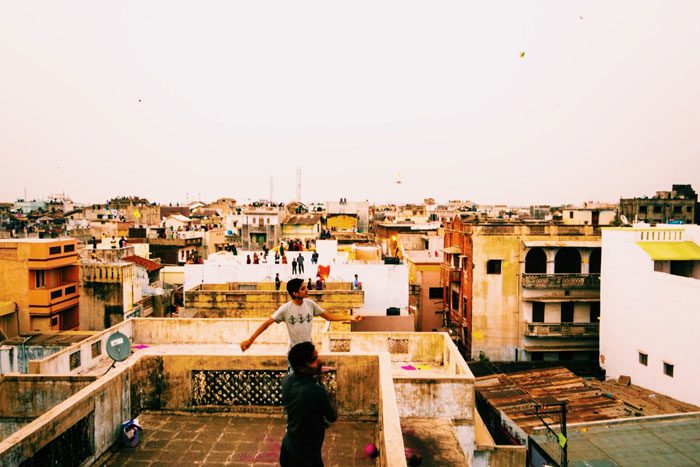 We saw kite markets set up alongside food stalls, children prancing around with their vibrant kites. The Uttarayan kites are made of lightweight paper (AKA tissue paper) and bamboo, and are mostly rhombus shaped with a central spine and a single bow. Many of them are the same size and solid colors but then again, you do see a variety of massive ones, foiled ones, and of course color-blocked ones. 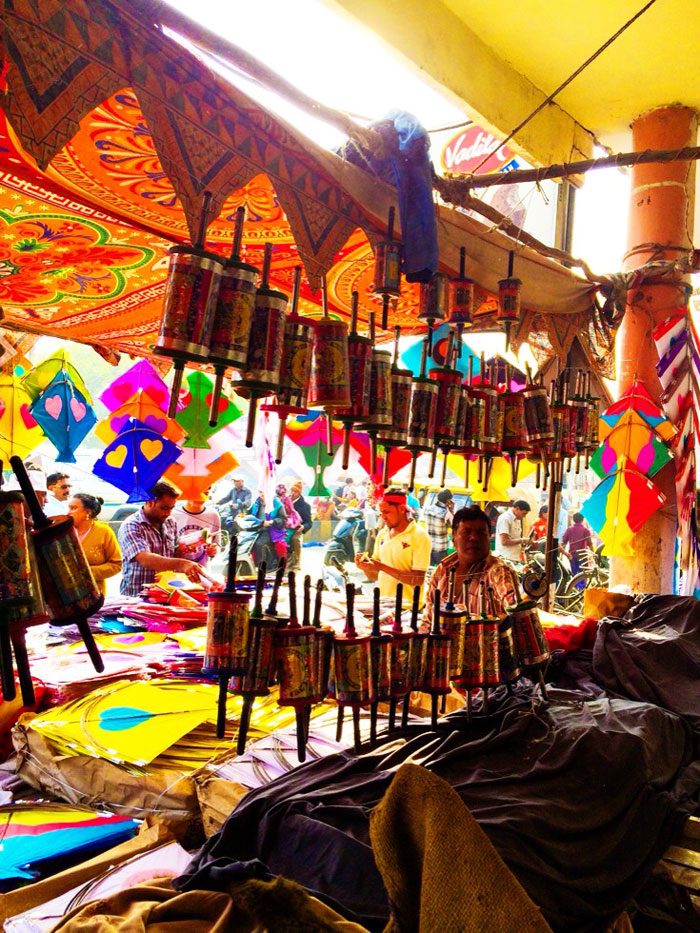 The kites we flew were called ‘Patangs’, fighter kites. The object was simple: try to slash each other’s string in the sky so that your kite is the only one up! May the best kite win! The strings were dyed a gorgeous pink, but were quite deceiving. They were covered with mixtures of glue and ground glass, so when dried, rolled up, and attached to the end of the kite could easily cut your fingers. Sharp and deep, like a paper cut. As we took turns, we realized the difficulty of this sport, concluding that my dad truly was a master, his passion was like riding a bike – he picked up right where he left off. 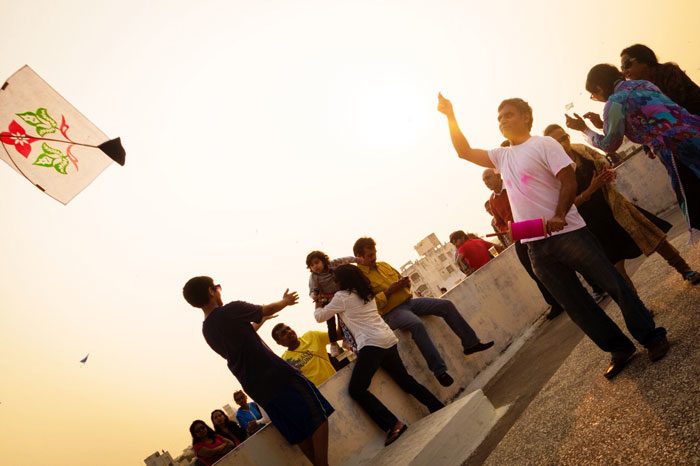 As the night came to an end, I did a 360 on a neighbor’s rooftop and saw the moon on one end being the perfect segway to the sun setting on another. I took it all in then. The sky transformed from blues and greens to a radiant pink with a breathtaking circle of orange. Just then, as the flecks of strings start disappearing, illuminated kites filled with lights and candles known as tukals or tukkals were launched creating a spectacle in the inky sky mixed with fireworks. The breath-taking sunset was only to be surpassed by the beauty of the thousands of flickering lights emerging into the sky. Moments like these are why I am who I am, as a woman, a mother, a daughter and as a designer. 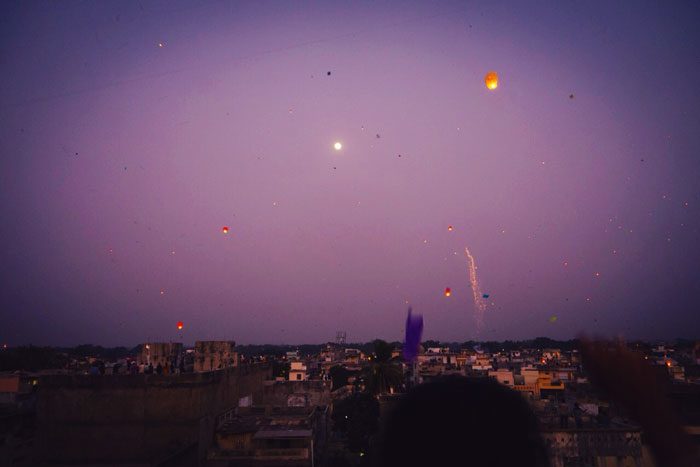 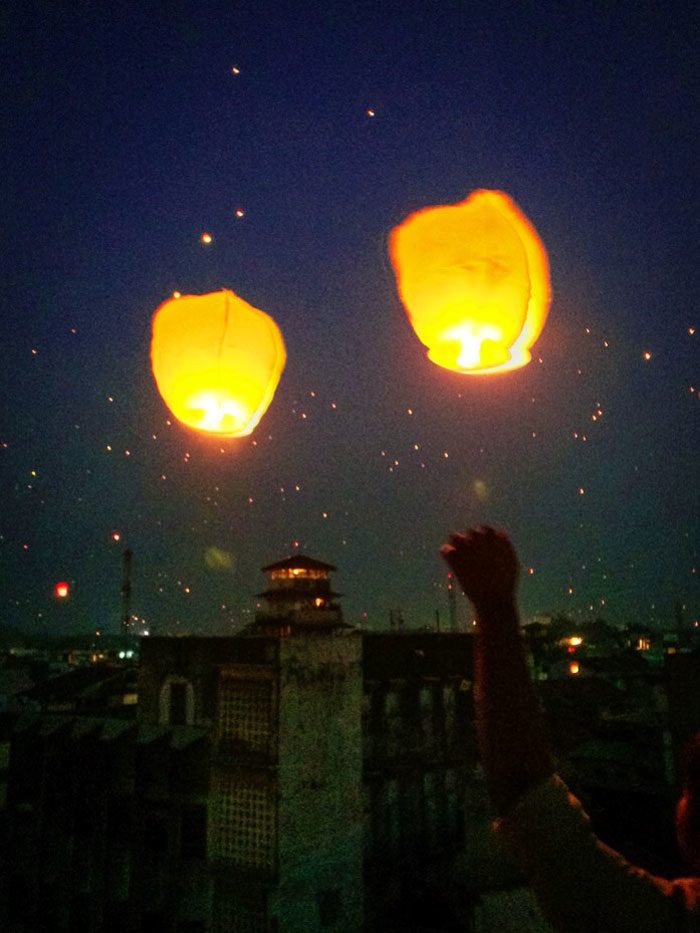 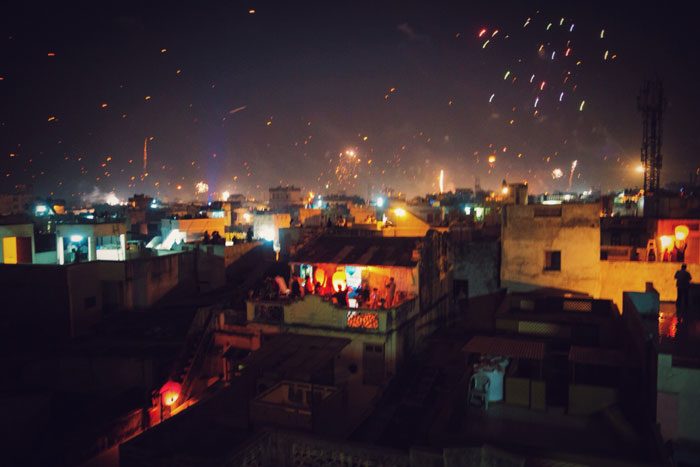 I can still hear the music in the wind and clamor around me, people still dancing around with excitement. Etched in me is the memory of my dad and the thrill of his childhood, the smile on his face the twinkle in his eye. And Mine.